It seems that if you want to grab and hold the media’s attention these days, all you have to do is drink tigers’ blood or booze with pickles, run around in public and babble incoherently about nothing to total strangers and take yourself too seriously. At least these are the modern-day prerequisites for running for President of the United States — or at least pretending to run for president while prick-teasing the media.

Speaking of which, Donald Trump keeps threatening to make a presidential run but hasn’t made it official, which involves forming an exploratory committee to search your parents’ basement and attic with the task of finding your original birth certificate and making an obligatory appearance on “The View”. Next you send out press releases telling them you plan on making an important announcement at some historical American landmark such as Taco Bell in Philadelphia or The Mall of America or Carhenge in Alliance, Nebraska. 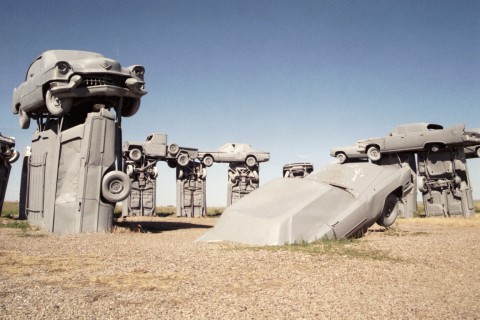 Carhenge: Nothing smacks of Americana more than makeshift graveyard of American-made cars passed off as art

Before the event, you leak information that you plan on announcing that you’ve filed papers and you’re running for president. But at the actual event, you tease the media by telling them are officially forming a presidential exploratory committee, now that the preliminary exploratory committee has located your birth certificate, thus proving you are over 36 years of age, were born in America and are prone to 4-year cycles of hyper-narcissism.

That said, news leaked by Donald Trump’s legion of underpaid interns indicate that he’s in the preliminary exploratory process, thus indicating he’s taking the first serious step in making a presidential run, which leads to this week’s David Letterman’s Late Show Online Top Ten Contest entry. But I am not going alone, Dear Reader. I’m soliciting your help – or not. I’ve written ten possible entries for this week’s list, and it’s up to you to help me select the CHOSEN ONE from the list (for I can only submit one) that you think has the best chance of winning.

9. Apologized to James Dobson for leaving a horse’s head at the foot of his bed

I pity the fool who don't vote for Mr. T

3. The Tea Party, Birthers and Newt Gingrich’s mistress added him to their speed dial

1. Burned all the skeletons in his closet – insurers issued $12 million check to replace Trump Towers