Multiple annotated reads of George Orwell’s 1984 have taught me all of the mathematical concepts this struggling prole needs to know in order to survive our pre-apocalyptic world – preemptively dubbed the “Tin Foil Hat Era”:

Initially these concepts were immaculately conceived by Big Brother, who impregnated the first sets of televisions, which eventually begat computers when Big Brother’s wandering eye preyed upon a younger, prettier, albeit more promiscuous medium of its former self. Big Brother’s minions, the One-Percenters, know these concepts as well, which is why they stoked the Hope Machine by adding the Powerball Lottery to its fire, which is currently burning in our collective underbelly to the tune of an estimated $1.5 billion ($930 million cash value, so not quite a billion dollar haul, unfortunately).

You heard me right, suckers: $1.5 billion — the asking price for the western half of Iowa. (For the record: Nobody’s asking.)

The One-Percenters also know that the lottery, like the U.S. tax code and ATM surcharges, is completely rigged in their favor. Even so, Powerball Fever has swept the nation as the proles push their other distractions aside, hit the ATM machines,  and bow and pray before the Almighty Powerball God that He will spit out the winning numbers.

69 coupling balls in Big Brother’s ball, pushing and shoving to be the next in line

Tragically, these gateway prayers lead to more dangerous, irrational behaviors and illusions of grandeur that, given the 1 in 292,000,000 odds of winning, the Almighty Powerball God will pick you (and the IRS) to be the Chosen One. This would be akin to thinking that of the estimated 2.2 Christians on Earth, God picked you of all people to run for president of the United States, so you could fuck up Earth,  one of his most disappointing creations — second only to Man. Other symptoms of Powerball Fever include speaking in prime numbers, talking about the lottery in lieu of the weather or that game last night and/or filling out paperwork to run for public office.

Although the conspiracy theory side of my brain is convinced the lottery is rigged, the left side reminds me that I was one number away from winning the Iowa Lottery 27 years ago. Having recently finished my two-year tour with Uncle Sam at the time, I was trying to plant my financial feet in the civilian world and recall saying, “If I just had $500 dollars, I could pay all my bills, buy some new pants for work, and have money left over to splurge on libations for my friends.” Two days later, I hit five of the six numbers and won $600. Had I prayed to God for a “34,” I would have won $3.8 million. Both of these numbers have haunted me ever since.

I took my winning ticket to the nearby Super Value grocery store on 42nd and University in Des Moines, and the customer service representative was in a state of shock when he ran my ticket. Without missing a beat he slipped me six bennies, and I was on my way to living the dream. I took my winnings and, as it was prophesied, I paid my bills, bought two pairs of pants for my work wardrobe and bought a keg of Milwaukee’s Best — only the Best for my fellow proles, eh?

I found out later that I was supposed to fill out some paperwork and pay Uncle Sam his cut, since my winnings were over $500. Note:  If you’re reading this and work for the IRS, I already spent all my winnings. Although I’m still wearing the same pants as part of my teaching wardrobe. So if you want your slice, Big Brother, come and take my pants, you Totalitarian Motherfucker!

Needless to say the right side of my brain eventually surrendered to the left, and I decided to purchase the winning ticket of Wednesday night’s drawing. That and I had a vivid vision while paying homage to the coffee gods at Java House. God, dipped in black leather from head to toe, paid me a visit and said that He would give me the winning numbers if I promised to finance a campaign that removed “In God We Trust” from all paper money and replaced it with “You Ungrateful Bastards Owe Me, Big Time!”

Me: I don’t know, that seems like a heavy burden.

Me: Okay…okay, what are the winning numbers?

He looked around to make sure that none of the nearby heathens were listening in, bent down and whispered the winning numbers into my ear as I wrote them down on a napkin.

God: Goddamn right I’m sure. Look at Me, I’m God for Christ’s sake.

In spite of the black leather attire, the left side of my brain conceded that God did indeed have a point, while the right side was overcome with giddiness after hearing God use His own name in vain. Priceless, it thought…priceless. After writing the numbers down, I looked up and God had disappeared. I noticed that the rest of my Java Cooler had also disappeared, a small penance for being a billionaire, I conceded. 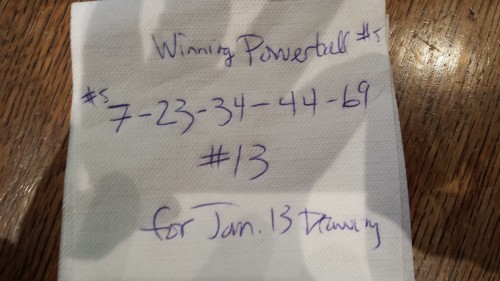 Looking at the numbers on the napkin, I decided to christen my new baby, Winston, an homage to the beloved prole Winston Smith (circa 1984). Like most hipster Millennial offspring, it’s only fitting that Winston was immaculately conceived in a coffee shop.

Given the life expectancy of a Powerball ticket is only 3 to 4 days, I thought it best to document Winston’s “Terrible Twos” stage, or midlife crisis in this case. I also thought it would be a good idea to share this publicly, so when I DO win, people will know why I, along with Winston, may have disappeared. Moreover, the latter served as a reminder that the drawing was two days away, and that I needed to cast my superstitious phrase into the world, just to remind God about our agreement:

“If I just had $1.5 billion dollars, I could pay all my bills, buy some new pants for work, and have money left over to buy the western half of Iowa for all my friends.”