Desperate to find any prospective jurors who have no knowledge or biases regarding the Boston Marathon bombings in 2013, Judge George A. O’Toole Jr. is thinking outside the judicial system and has opened the jury pool to jurists residing outside of Boston, inanimate objects and abstract ideals.

Nearly 3,000 prospective jurors were sequestered to a Boston courthouse Monday, the first day of Dzokahar Tsarnaev’s trial – the man accused of the terrorist bombings — only to be sent home after the first round of softball questions:

1. Do you have a pulse?
2. Do you or anyone you know own a television set?
3. Have you watched FOX News the past year?
4. Did you think Juror No. 3 in “Twelve Angry Men” was hot?
5. Can you spell Dzokahar Tsarnaev?

Feeling exasperated, Judge O’Toole drew from his Shakespearean Bag o’ Tricks and decided that desperate times called for desperate measures. “If we’re going to find somebody or something that has completely no idea what happened in Boston that day, we need to cast a bigger net and hopefully catch some bottom feeders who are completely oblivious to the media,” he said. “If this means sequestering people living outside of Boston and/or pulseless jurors, then so be it. Who’s to say that the latter does not constitute a jury of the accused’s peers?”

The judge’s plan worked the next round of sequestration and helped land the Holy Grail and World Peace on the jury, Jurors No. 1 and No. 2, respectively. 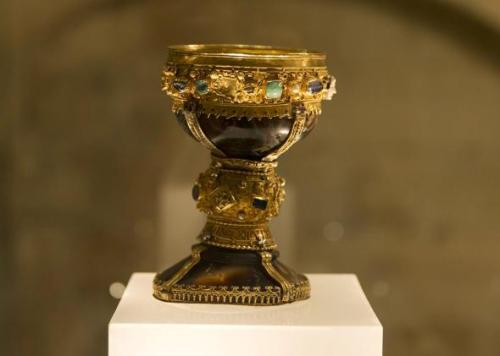 Juror No. 1 admitted he was excited about finally serving a lower power and relieved to finally escape the ubiquitous manacles of the CRRP (Christian Relics Relocation Program)

With regard to opening the pool outside of Boston, the Judge insisted that prospective jurors should meet all of the following criteria:

1. Must reside outside of Boston area
2. Have absolutely no knowledge of terrorist activity inside or outside of U.S. Borders since the 9/11 bombings in New York City
3. Have nothing to do for the next six months

The aforementioned criteria did manage to ensnare one unsuspecting patriot, former President George W. Bush, Jr. who will serve as Juror No. 3. Although in a handwritten statement, presumably scribed in crayons, Bush made it clear that he will conditionally serve on the jury, citing: “I will serve on the jury but there’s no way in Sam Hill I’m gonna sit next to that World Peace feller.”

Juror No. 3 says he needed to take a creative break from painting before moving on to his kitten series