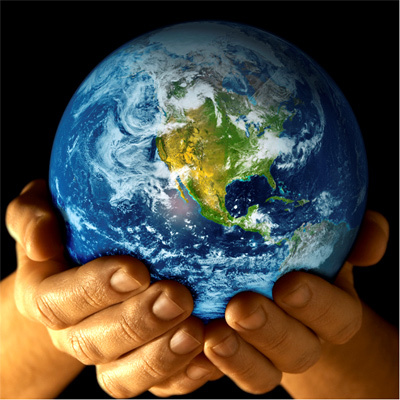 Earth Day: a man-made invention (from the makers of Valentine’s Day & All Saints’ Day), wherein its creator sets aside a 24-hour period each day to reflect upon the other 364 days of the year when man clog’s Mother’ Earth pores with plastics, recyclable garbage, archaic non-plasma television sets, nuclear waste, appliances, concrete slabs, dead sex toys, and aluminum canisters filled with petty rationalizations and excuses as to why Americans feel the need to bend Mama Earth over and stick it to her every non-Earth Day of the year.

Like insincere New Year’s Resolutions, we Americans used Earth Day as an excuse to take time away from producing more waste to make vows not to produce more waste. The big question is how many of us, when we wake up tomorrow morning with an environmental hangover, will actually remember the promises we made in the global warming of the moment while trying to get into Mama Earth’s pants.

That said, I’ve decided to strike preemptively by going public with my vows to help protect Mother Earth’s borders:

1. Whenever somebody tells me Global Warming is a hoax (which usually happens on an uncharacteristically cold day in Iowa), I will open up a can of Lysol on ‘em and spray the CFCs in their eyes and say: “How does that feel, naysayer? You think Mother Earth likes it? Do you? Huh?” (Note: this is merely a hoax, so if anyone should go blind or bleed from the eyes, chalk it up as mere happenstance.)

2. Participate in the “Litterbug Catch and Release Program.” Any time I see somebody litter or flick their cigarette butt on the ground, I will apprehend them and call the authorities, who will arrest them and either release them on the other side of the ozone layer or sentence them to hard time in a nearby land fill (formerly known as “The Dump”).

4. Team up with Mother Earth’s Creators, Klaatu and Gort (aka Jesus and God) and film a sequel to the original “The Day the Earth Stood Still” (not to be confused with the recently recycled version starring Keanu Reeves, whose acting career has been overly recycled beyond the Best-When-Used-By Date: “Bill and Ted’s Excellent Adventure”). In the new film, “The Day the Earth Stood Full,” we will declare Inertia on Earth, holding earthlings hostage until they meet our demands: Appoint WALL-E Czar of Earth, stop using doublespeak to mask threats against Earth (e.g. “clean coal”), and boot Keanu Reeves out of the Actors’ Guild – no questions asked.

This entry was posted in General Satire and tagged Earth Day, humor, So it goes!. Bookmark the permalink.