Finally, somebody stole my identity.

That somebody, or who I, not by choice mind you, now call the New Me, finally took the bait and stole my identity. Ever since I invested all of my hope inY2K (that’s “Year 2000” – for my fellow Acronym Challenged brethren out there) wiping the financial slates clean from microchip memory, only to be thoroughly disappointed when the anticipated crash did not happen, I’ve been praying somebody would steal my identity and the financial baggage that comes with it.

During the waning days leading up to the turn of the century, when I wasn’t thinking about what life must have been like in debtors’ prisons, I channeled all of my remaining energy into Operation Ground Zero – my little pet name for the impending Y2K crash. Often times these thought strands would merge, and I imagined the resurrection of debtors’ prisons in the post-Y2K era.

Ironically, I envisioned debtors’ prisons in an optimistic light – a trait I picked up through my mother’s umbilical cord while floating aimlessly in the womb, without any financial worries whatsoever. Ah yes, the salad days. Debtors’ prison: Where else are you guaranteed a roof over your head and three square meals a day? Moreover, debtors will get the opportunity to spend more time with their families, since they’ll be imprisoned alongside their loved ones instead of alone in an office cubicle, not to mention, debtors’ prisons will have the best education system, since most teachers are in debt up until they retire.

To help tempt and encourage identity thieves, I’ve been leaving my financial baggage all over the Internet, unattended, despite all the warnings circulating in the virtual airwaves via telecom:

Warning: Do not leave your financial baggage unattended, for bags may be stolen or injected with a virus that will virtually destroy your life. Please report any unattended bags to the Internet police or any behaviors that may be considered suspicious, including but not limited to persons fitting computer hacker profiles that demonstrate antisocial behaviors in public places, shoeless children offering to carry your bags in exchange for money and/or sexual favors, or mechanical dogs sniffing through your matching, leopard-skin luggage set.

Despite making wholesale security cuts and leaving behind a mixed-trail of computer cookies a hack hacker could easily digest, nobody had been tempted by my identity. They must have read the writing on the firewalls:

Keep Out! This Poor Cat Ain’t Carryin’ No Cash or Credit

Even so, I thought somebody would at least nibble on my identity before moving on to other, more reputable and potentially profitable marks, say AIG shareholders. Although I had never bought into the Fear Industry’s mega-marketing machine, I thought my revealing identity would lure somebody into its financial abyss. Exacerbated by 9-11 attacks and the “War on Terror,” the “War on Identity Theft,” has stepped up its measures as well, pumping paranoia into the market through fear generators – known as televisions and radios in less paranoid communities.

Not a day goes by that I don’t hear some advertisement warning me about identity theft:

Voice Over: Did you know that paying with unprotected plastic is like having sex without a rubber? Whether it’s somebody stealing your identity or giving you an incurable STD, you’re putting your life on the line. Why risk subject yourself to a long, painful death, when you can protect yourself and enjoy the temporary gratification without having to worry about what or who’s on the other end? No more worries; now you can buy the best protection in the industry…

The Identity Protection Industry Racket has become the new Mafia in America, offering consumers protection from identity thieves in exchange for nominal fees. 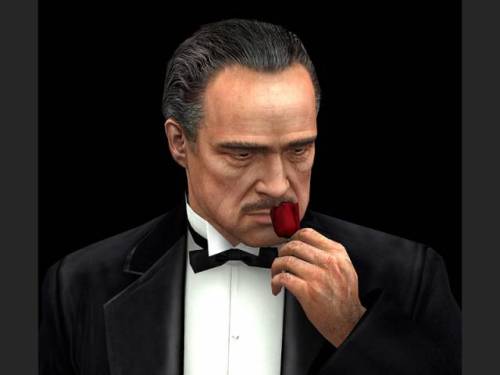 "You want your identity protected? I'm going to make you an offer you can't refuse..."

For me the key to fighting identity theft is making sure I don’t have anything worth stealing (at least that’s what I keep telling myself), including my dignity. Subconsciously, at least that’s what I tell Therapist Bob, I’ve taken this philosophy to an extreme by digging a financial hole to China, who by the way, already owns my debt by way of the United States. Hmmmm…maybe we should tempt another country to steal our country’s identity to help erase our debt and lift us out of the current recession.

So I began leaving my identity laying around on the Internet, thinking somebody would quickly snatch it up, but no such luck. I even resorted to using reverse psychology: “Yoo hoo. Over here. Whatever you do, keep your hands off my sweet, little identity, big boy.”

But to no avail.

However, some sucker, the New Me, finally took the bait and hooked my identity last month, only to discover he had been hobbled by a rapidly falling credit score. The New Me is not banking too well. Worse, the New Me had the nerve to file a lawsuit against the Old Me, claiming I had entrapped him into a financial quagmire.

But I’ve vowed to fight the New Me, to the death if need be, and it’s no longer about the money, rather it’s about protecting my dignity – at least what’s left of it after amortization.

This entry was posted in General Satire, Observational Humor and tagged humor, So it goes!, Therapist Bob. Bookmark the permalink.